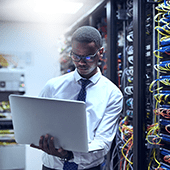 If Microsoft’s latest server software is any indication, the virtualization trend shows no signs of slowing down. The first preview of Windows Server 2019 was released in March and includes a number of features focused on IT efficiency. Let’s take a look at the most valuable updates for small businesses.

In March, Microsoft released a preview of Windows Server 2019 and announced that it will be generally available before the year is over. This will be the eighth iteration of the Windows Server operating system and will include new features to help businesses manage their network security, data storage, and administrative controls.

One of the biggest changes coming to Windows Server is how application containers are created and managed. Containers make it possible to package everything an app needs to run and deliver it to desktops, regardless of a desktop’s hardware and software specifications. So if you’re using an Apple computer with almost no free hard drive space, you could run a Windows application stored in a container without any problem.

Microsoft claims it can reduce the storage requirements of containers to one third of their current size with Server 2019. Additionally, the operating system will introduce new compatibilities with an open-source virtualization standard known as Kubernetes, opening up countless new possibilities for customization.

A virtual machine is similar to a container, but instead of packaging just one application, virtual machines contain entire desktop environments that are powered by server hardware and accessible from remote workstations. Windows Server 2019 will make virtual machines even harder to penetrate, meaning that even if a cyberattacker compromised your server, the virtual machines stored on it would be protected by an additional layer of security.

Microsoft is also incorporating its Advanced Threat Protection (ATP) protocols into its newest operating system. ATP has been incredibly successful at intelligently detecting and preventing cyberattacks on previous versions of Windows, and adding it to Server 2019 is a welcome addition.

Virtualization is a perfect example of how IT support models are evolving. A decade ago, virtual machines and containers would have been reserved for all but the largest organizations, but today these cutting-edge technologies are both affordable and flexible enough for small businesses. The only thing SMBs need is qualified IT support. Give us a call today about upgrading your technology infrastructure.

How to calculate the TCO of VoIP

How to calculate the TCO of VoIP