The basics of app virtualization

By Truewater May 6, 2016 Virtualization 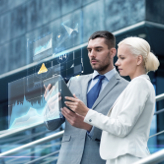 To understand app virtualization, we need to know how desktop applications are traditionally installed first. When you install an application like Skype or Slack onto a computer, the installer program puts most of the files required for the app to run in the Program Files folder on your hard drive. This process is usually fine for personal use, but things can become problematic if you install similar apps on your device.

For instance, if two similar applications are installed on the same file destination, there is a chance that these programs might conflict with each other and inevitably crash. Similarly, if you choose to uninstall a program without knowing that it shares important files with another application, you run the risk of breaking the other application. Additionally, installing applications the traditional way means you’ll have to manually install the same programs for all your users. Not only is this expensive but installing new applications for every desktop in your company is going to take an absurdly long time.

The solution to this is app virtualization. This refers to the type of virtualization where you run a program on a thin client, which runs in an environment separate from the physical server allowing you to run programs that are normally not compatible with a certain operating system (OS). In other words, virtualized apps trick your computer into working as if the application is running on a local machine, but in fact you’re actually accessing the app from somewhere else. This is better than traditionally installed programs because virtual apps run and feel just like any regularly installed app would.

Apart from the basics however, app virtualization offers more advantages for small businesses including:

Before you start deploying app virtualization solutions at the workplace, you need to have a stable network connection first so that you can smoothly stream apps to your users. This is definitely more important for graphic intensive applications. You should also note that some applications like antivirus programs are difficult to virtualize since they need to be closely integrated with your local OS.

App virtualization is popular for many SMBs and it definitely pays off to know why it’s good for your company before taking the plunge. Virtualizing a workplace is no easy task and that’s where we come in. So if you’re convinced that your company can benefit from app virtualization, get in touch with our IT experts today.