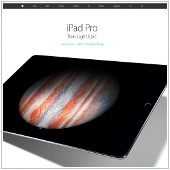 The iPad Pro has been out for several months now. Over the course of this time, millions of users across the globe have had the opportunity to spend quality time with Apple’s new tablet. But for those of us who aren’t quite certain they should purchase one yet, we’re still wondering, “how has it worked out for those early adopters?” A new survey released by CIO, a website that delivers the latest news and tips for IT professionals, questioned 11 users about their experience thus far. Here are their thoughts on the good and bad of the iPad Pro.

We hope this feedback provided by early iPad Pro adapters can help you make an informed decision as to whether or not Apple’s latest tablet is suitable for your business. If you’d like to learn more about Apple products or need to service some of your own, don’t hesitate to get in touch.