How hi-tech can healthcare get? 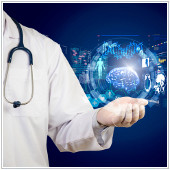 The mere mention of the word “technology” elicits a certain expectation. Namely, that we’re dealing with something that’s modern, and new, and has the potential to change our lives. The word “disruptive” is also indicative of change, so a term like “disruptive technology” may seem redundant. But in healthcare it makes perfect sense as the status quo is constantly under threat.

Technology companies are transforming the healthcare industry perhaps more remarkably than any other industry. Everything from miniaturized pacemakers and mobile stroke units to wearable wellness apps and bed sore-preventing electronic underwear are leading the way to a seemingly sci-fi future in medicine.

And we’re on the cusp of several other game-changing innovations that clearly qualify as “disruptive technology.” They’re things that are likely to derail the healthcare industry’s apple cart, as it were, by introducing completely new ways of diagnosing patients, conducting clinical trials, treating illnesses, and much more.

For medical industry stakeholders, the first step toward embracing these changes is awareness.

The “internet of things”

The “internet of things” literally means that “things” will be connected to the internet. People, cars, buildings, household objects, etc. will all be fitted with sensors and network connectivity that will allow them to send and receive data over the internet.

The implication for healthcare providers is all about data capture and analysis, as this kind of technology will allow physicians to have access to patients’ vital signs on-demand: blood pressure, body temperature, glucose levels, and respiratory rate will be read, analyzed, and recorded, all while patients remain in the comfort of their home. How would you adapt to this kind of patient monitoring scheme if it were to go mainstream?

Computers are programmed to do everything from making coffee to flying planes, and they’re even programmed to learn, as chess master Gary Kasparov knows all too well from having faced Deep Blue in their famous match.

But can corralling “big data” – which in this case amounts to roughly a trillion gigabytes of patients’ health information culled from EHRs, laboratory tests, and the like – lead to machines actually being able to diagnose and treat patients better than highly-trained human doctors?

Many in the industry are betting that it can, and AI start-ups in healthcare have raised more than $870M since 2011. Are there opportunities here for your business?

By simply donning a special hi-tech virtual reality headset, a user can be “tricked” into thinking they’re in an environment that they’re not. And the technology is already being used to treat autism and PTSD, as well as conduct training in emergency response and patient diagnosis.

But it’s the future possibilities that defy belief: imagine an American doctor being “transported” via VR to a rural clinic in Afghanistan to interact with patients, participate in evaluating them, and even perform their surgeries.

Now try to imagine a patient “virtually” visiting your hospital to meet with your “machine” doctor, who will then read vital signs from nano devices inside the virtual patient’s body, over the internet, in order to schedule their robotic artificial retina surgery?

This sort of scenario isn’t actually as far-fetched as it may sound, and it may not even be that far off, either. So now might not be a bad time to evaluate how these futuristic-sounding advances – these disruptive technologies – might impact your future.

A quick call to a technical expert is one way to get answers… So contact us today.