Google and the Fight for Chat Dominance 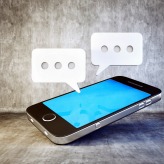 It’s no great industry secret that despite dominating in other areas, Google is seriously lagging behind the competition when it comes to instant messaging applications. And now, rumor has it, the tech giant is preparing to put a stop to that and finally make its mark in this area. But what can Google offer that its rivals don’t, and why would you consider switching allegiance from your favorite chat app? Information is scant but we’re already privy to a few details.

Chats apps: most of us are glued to them throughout the day. You only have to look at the hoards of sidewalk and public transport zombies to realize that. In the West the market is dominated by Facebook’s own Messenger feature, and WhatsApp which they acquired back in February 2014 for an eye-watering $19 billion. Look to the East and Japan, Thailand and Indonesia are mostly committed to Line while in China WeChat is the messaging app of choice, and has taken over lives to the extent that users can pay for everything from a coffee at 7-Eleven to a taxi ride with the app.

With such a potentially massive, and lucrative, market to tap into it’s not surprising that Google has decided to get back in on the action and are no longer content to sit on the sidelines. A recent report in the Wall Street Journal gives us a sneak peek into just how Google might be staging their comeback.

Comeback you say? Yes – remember Wave? Remember Google Talk? Even now Google’s current offering, Hangouts, has failed to set the instant messaging world on fire. Initially developed as the video calling and instant messaging function within Google Plus – Google’s answer to Facebook – Hangouts may have a core base of loyal fans but it consistently fails to feature among the most popular downloads in the Apple or Google app stores.

So what does Google have up their sleeve in an attempt to reverse their ailing chat app fortunes? The WSJ’s piece reports that the company is developing an app that enables users to not only chat with friends and co-workers, but also with ‘chatbots’. These chatbots are designed to assist with queries and searches – and given that Google’s strength lies in searching the web to find relevant results (or answers) could this be the thing that differentiates them from their rivals?

Well, not quite because since the beginning of 2015, Facebook has been testing “M” – a semi-automated digital assistant within Messenger that combines manual human labor and artificial intelligence to answer users’ questions, find information and even book appointments. Google clearly wants to compete with Facebook as Google Plus, albeit unsuccessfully, demonstrates. And seeing as the company already has powerful search capabilities at their disposal this could give them the edge – particularly if they can fully automate.

As of writing Google hasn’t revealed a name for their chatbot-powered messaging app nor has any timeline been released. All we really know is that the AI boffins at Google have been working on the project for around a year. Until more details are made public consumers will just have to sit tight and see if the service does see daylight. And if it does whether it will be a viable contender in the battle for chat app supremacy or if like Hangouts it is destined to forever snap lamely at the heels of Facebook Messenger, WhatsApp, WeChat and Line.

Want to know how you can help your small or medium-sized business stay one step ahead of YOUR competition? Talk to us today about implementing IT solutions that really will give you the edge.