Get more productivity from your iPad 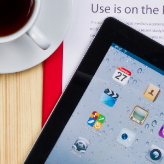 Ever wish you could get more work done with your iPad? You’re not alone. In fact, one of the main reasons people purchase an iPad in the first place is because they believe it will give them the ability to be more productive while out and about. The reality is that many individuals only end up using it to surf the web or watch Netflix. However, if you still harbour ambitions of making your iPad a productivity tool, here are the three things you need to make it happen.

We understand a lot of people buy an iPad because it doesn’t have a keyboard, but if you really want to be more productive using your iPad then a keyboard is a must have item. With both Microsoft Office and Google Apps for Work now available for use on iPads and iPhones, it means that it is now easy to create and edit documents and spreadsheets from your tablet. And it is far easier and quicker to edit them using a keyboard.

A number of iPad keyboards are available including Apple’s Smart Keyboard which acts as a case as well. Logitech’s Create keyboard is an alternative that will give your iPad the look and feel of a laptop. Both of these options connect to your iPad via the Smart Connector, but you’ll also find a number of Bluetooth keyboards on the market too. The key is finding a keyboard that you find comfortable to use.

If you have ever worked in an office that let you use dual monitors, you know how awesome it is. Unfortunately, if you have to work from home or out on the road it means you are usually confined to the single screen of your laptop. However, with the Duet Display app, you can connect your iPad to a Mac computer operating on OS X 10.9 or above or a PC running Windows 7 or above and have it serve as your second monitor. Both mirror and extended desktop modes are available so you can capture the same feel of working at the office even if you can’t physically be there.

Samsung Note users constantly rave about how much they love using their stylus but Apple continues to lag behind on this front. The software giant didn’t release their first stylus until late in 2015 and the functionality is still fairly basic. However, many third-party developers have stepped in to fill this gap by creating styluses for the iPad and now some heavy hitters including Microsoft are making their apps stylus compatible to increase your productivity options.

That’s great news, but the biggest productivity benefit of using a stylus is probably more of a mental one than any tangible gain. Holding and working with a pen, or in this case a pen-shaped device, feels more like traditional work and gets you in productivity mode. Since you likely use your fingers to navigate your iPad in more casual settings, this mindset can carry over to when it’s time to work. Investing in a stylus can create a clear divide as to when it’s time to work using your iPad and when it’s okay to open up your favorite freemium game and challenge for the high score.

Need more advice on how to boost your productivity when using an iPad? Want to see what work alternatives are available for mobile employees? Contact our experts for answers to these and any other questions you might have.

IT Security Policies you need to implement

IT Security Policies you need to implement