What we can expect from the new iPad 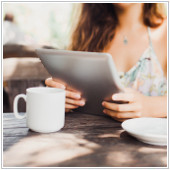 Hold off on buying that iPad Pro for yourself or for your office because there will be a smaller and more powerful version of the iPad Pro that’s going to hit the shelves some time soon. The 9.7-inch iPad Pro model is expected to offer the same features as the massive 12.9-inch model but with a better camera and at a cheaper price. So what are some things we can expect with the new launch? Here are a few of the exciting features we can anticipate from the new iPad Pro to help you decide whether or not you want one.

The new iPad Pro model will be smaller than its predecessor sporting a 9.7-inch model and follows the look and design of the iPad Air 2. With a 2048 x 1536 pixels screen resolution, you can expect your display to remain pretty as well. The new model will be available in rose gold, silver, gold and space gray.

The new iPad Pro will also sport a quad-speaker system around the sides of the tablet. Apple claims that the 9.7-inch iPad Pro will feature a True Tone Display, making this a device you can take anywhere. This changes the white point of your iPad’s display based on the different ambient lighting environments that you’re in. So if you’re under direct sunlight, the screen will appear bleached and if you’re under LEDs the display can appear bluish.

Like the iPad Pro, the next-generation model also offers the same hardware and features. Storage is bumped up to 32GB with up to 4GB of RAM included. There will also be a 128GB model for those needing extra storage. The new iPad Pro will still include the old A9X processor, but this isn’t exactly a bad thing since it still outperforms other single-core processors and definitely comes out on top in terms of other Apple devices.

The smaller iPad Pro will also have the same amount of battery life as the 12.9-inch version. Apple states that browsing time with Wi-Fi or cellular data can last up to 9 to 10 hours, which is decent for battery life.

While most of the old iPad Pro’s features remain within the 9.7-inch model, there are some noticeable upgrades to its camera. Probably one of the more exciting changes is its upgraded 12-megapixel rear camera and its ability to record 4K resolution videos. Video capturing, viewing and editing is also pretty good on the iPad Pro so think about whether your company will be utilizing some of these in the future.

Apple will release a Smart Keyboard with smaller keys to remain proportional to the size of tablet to accompany the device. Additionally, the new model will also have full support for the Apple Pencil. While we are unsure if prices will change for the $99 dollar pencil, it’s safe to assume that the new iPad Pro will give you the same control and drawing experience for graphic designs and sketches.

The Wi-Fi only 12.9-inch iPad Pro model is available for $949 while a 128GB Wi-Fi and cellular model is available for $1,079. Let’s face it, that price is pretty expensive for an individual let alone to equip an entire company. Instead, the new iPad Pro model offers the same capabilities of the previous model at a friendlier price. These iPads start from $599, so if you’re thinking about going Pro, you should definitely consider this product first.

These are just some of the few features that we can expect from the new iPad Pro. So consider all these tech specifications and factors first before deciding whether or not going Pro is the right decision for your business. Contact us if you want to know more about anything Apple related.

10 Office 365 features you need to know about

10 Office 365 features you need to know about