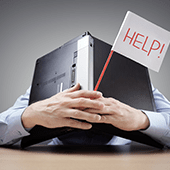 Explaining the concept of virtualization is no easy task, and failed attempts to do so have left it with an undeserved reputation. We want to set the record straight about this technology’s many benefits by dispelling the four most common misconceptions.

Myth #1 – Virtualization is too expensive for SMBs

Many people assume that the more advanced an IT solution is, the more expensive it is to install and maintain. That’s not the case for virtualization, which is a strategy to boost hardware efficiency and cut costs.

Sure, a virtual server requires more support than a traditional one, but the capacity boost means you won’t need to purchase a second server for a long time — resulting in a net reduction of hardware and IT support expenses. Furthermore, managed virtualization services usually follow a pay-as-you-go model that costs just a few bucks per hour.

Most people feel comfortable with the traditional computing model — one set of hardware equals one computer — but that doesn’t mean a new model has to be more complicated. With virtualization, one “traditional” computer can run as two or more virtual computers. The technical aspects of how that’s accomplished may be confusing, but the good thing is business owners don’t need to bother with those details.

Virtualization actually reduces complexity because it allows business owners to expand their IT systems whenever necessary without having to worry about hardware limitations.

Myth #3 – Support is hard to come by or inconvenient

You may be more familiar with The Cloud than with virtualization, but that doesn’t mean the latter is a niche technology. The value of the virtualization market in 2016 was $5.6 billion and supported by IT providers all over the country. It’s also a technology that works well with remote support, which means technicians can install upgrades or resolve issues without having to travel to your office.

There’s a misconception that if your server is running three virtual Windows 10 computers, you’ll have to jump through extra licensing hoops. In reality, virtualization follows the same licensing rules as traditional computing: one desktop, one license, which means you won’t need to rethink your software budget.

It’s natural for new technologies to cause confusion, and virtualization does require a new way of thinking about IT hardware. But as long as you have certified technicians like ours on hand, everything will run smoothly. Give us a call today to find out how we can lower your hardware costs and simplify your IT support.

Why VoIP is best with remote workers

Why VoIP is best with remote workers