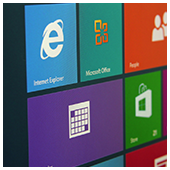 The Windows Fall Creators Update released in April introduced many useful and interesting features, including a decluttered Start menu, more control over Windows updates, and an enhanced Microsoft Edge browser. Five months later, Microsoft follows up on all those enhancements with a new set of features. Here’s everything business users should get excited about.

‘OneDrive Files On-Demand’ solves syncing problems often encountered by those who don’t want all their files synced to all their devices. This feature will give users the option to choose the folders that will be downloaded to the device they’re using, which helps save storage space and bandwidth, and gives users more flexibility.

Microsoft beefs up Windows 10 security by introducing ‘Controlled folder access,’ a welcome feature in an era of rampant ransomware outbreaks such as WannaCry and Petya. This security enhancement enables users to assign a ‘switch’ to applications. When the switch is turned on, users are alerted any time unauthorized applications attempt to access or modify files in protected Desktop, My Documents, My Music, My Pictures, and My Videos folders.

The Fall Creators update will also feature ‘Windows Defender Exploit Guard,’ a threat prevention system that, in Microsoft’s own words, ‘helps make vulnerabilities dramatically more difficult to exploit.’ The platform is primarily intended to recognize and safeguard against brand new malware that has not been cataloged or analyzed by security professionals.

Microsoft will also introduce ‘Windows Defender Application Guard,’ a program that protects Windows 10 users by isolating and containing threats and malware within the Edge browser. For now, it will be available only to Windows 10 Enterprise Edition and Hyper-V users.

Both ‘guards’ will complement firewalls and antivirus software to provide comprehensive protection to data, programs, devices, and networks.

Windows 10 subscribers will also benefit from the ‘My People’ feature, which will enhance collaboration. This new feature will let users pin contacts from their contact list to the Start Bar for quick access to email, instant messaging, or video calling. To activate, launch the People program and click on the icon found in the taskbar’s notifications area. Contacts can be pinned only if they have the Windows 10 App open in their system.

The Fall Creators Update will also introduce small yet essential enhancements that will prove highly advantageous to businesses, one of which is a bandwidth limiting capability. Using this feature, network administrators can limit the amount of bandwidth allocated for Windows updates, allowing them to manage the updates for all devices across an entire network.

A battery-saving function will also be introduced to the new Windows 10 via ‘Power Throttling,’ which determines the activities that the system should prioritize based on a user’s activity. For example, if a user has multiple apps open but is actively using only a photo-editing tool, the system will allot greater power resources to the most actively used app and minimal resources to inactive ones.

Are you maximizing your Windows-powered computers’ features and capabilities? Get in touch with our experts to explore what Microsoft products can do for your business.