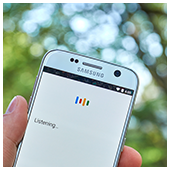 By now, that voice on your smartphone that you constantly rely on to search for recipes or movie schedules may already be part of your Googling routine. As helpful as it is, barking commands at your Google Assistant, an intelligent personal assistant, isn’t always the best way to go. Not to worry, as the brains at Google are on track to coming up with several workarounds.

A new type of Google Assistant

Don’t be surprised when a keyboard icon pops up on your Google app one of these days. This is your cue to type in something instead of verbally dictating as you normally would. Once you tap the icon, a text field will appear for your written commands. It may not seem like the most helpful or innovative update on the app, but it presents several benefits.

This update may come in handy when you’re in meetings, when you’re too sick to speak, when you’re in a noisy and crowded venue, or if you prefer to give your assistant precisely worded instructions. If you’re not impressed with this enhancement, consider it a neat alternative that the geniuses at Google offered.

Aside from the keyboard icon, a “search gesture” functionality might also be on the way. It would let plus-sized smartphone users perform Google searches right on their device’s home screen… with a simple and swift swipe. Based on recent updates from Google, this feature would provide a reprieve from having to tap the Google search bar at the top, a point of concern for users of large-screened tablets and smartphones. Regardless of what the “Search gestures” feature aims to improve, it’s probably geared at further simplifying the search function across all devices.

The folks at Google are also reportedly working on integrating Google Assistant on Android Wear devices. Based on the latest Google App updates, an Android Wear Assistant looks to be on the horizon for users of Android’s smartwatch. Among all the reported updates on Google Assistant, this is where speculation runs the highest. If it pushes through, Android smartwatch wearers may soon be empowered to make commands to Google Assistant at any place and at any time – even while running.

Although these updates are still in the early stages, they’re bound to benefit personal and business users once launched. Google’s efforts at pushing these small yet significant changes may mean crucial improvements for your business, too. To maximize related technology at your disposal, get in touch with us now.