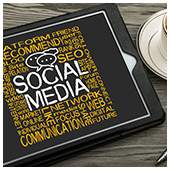 Social media marketing is tricky, to say the least. It’s difficult to allocate the resources that create the desired effect, especially when so many platforms are available. Facebook might be the biggest name in the industry, but that doesn’t mean it will suit your organization. Instead, business owners should familiarize themselves with all the available options.

Facebook
According to the 2017 Wasp Barcode State of Small Business Report, Facebook is the most utilized social media of all the options. Out of the survey’s 1,100+ respondents, 68 percent used Facebook as an integral part of their marketing strategy, with LinkedIn coming in second at 39 percent.

One of the contributing factors to Facebook’s popularity is the fact that it’s currently approaching a total of 2 billion personal users, making it the first place companies go to when they want to increase their brand awareness. Other marketing-specific reasons businesses choose Facebook are social media referral traffic, terrific conversion rates for e-commerce traffic, and a huge impact on user purchasing decisions.

YouTube
YouTube is considered an undervalued social media resource for two main reasons. Firstly, although it’s the second-largest search engine on the internet, it still looms in the giant shadow of its rival Google Search. But when properly utilized, YouTube allows you to create channels for your products or services to be discovered by users, with little more than search optimizations.

Secondly, Google actually owns YouTube, and videos are reportedly 50 times more likely to appear on the first page of search results than other organic content. Keep in mind that video production quality is more important than ever, so your content needs to be well-produced in order to make an impact.

Google+
Engagement and content on sharing might pale in comparison to Facebook, but an active Google+ page measurably contributes to the Google search ranking of your website — just another way you can ensure your site’s position on the first page of Google results should be done. Also, Google+ has hundreds of millions of users and some of the platform’s features — such as live Hangouts — can be utilized to share content across all Google channels, including YouTube.

Snapchat and Instagram
If your target audience is on the younger end of the scale, Snapchat is the way to go. The important thing to keep in mind when you want to connect with 18-24 year olds is to always be fun and creative. Your content doesn’t need to be overly-polished or corporate. Currently, there are over 100 million active users on Snapchat.

As for Instagram, it boasts over 400 million monthly users as well as a more well-rounded user base in terms of age and geography. The content on Instagram should look more professional and more artistic, and there’s an added benefit of direct integration with Facebook every time you post a new picture or video.

Yelp
Review sites might not be the purest form of social media, but Yelp is another great way to connect with users and respond to (hopefully positive) feedback. If you’re concerned about the controversy and negativity that have arisen from Yelp reviews, the Yelp team is known for helping businesses improve their online status and rise above the harsh comments.

If you still have questions about social media platforms and how to utilize them to your advantage, feel free to contact us today!