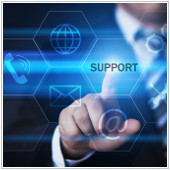 Virtualization has permanently changed the world of IT and computing and bringing with it the overhaul of IT architecture and workflow. One would think that it would reach its saturation point sooner or later but with constant innovation and development, virtualization has permeated and penetrated deep as to reach the client level. Here are three virtualization options for SMB’s wishing to optimize their tech resources:

As hinted in the name, it is an application delivery method that delivers desktops or applications from a shared server. This enables access to client applications from a central server that is connected with clients. This initiates a presentation session through a web portal while giving them access to a virtualized application instance on a shared Windows Server OS. The only resources shared with the client is the graphical user interface as well as the mouse/keyboard.

Sharing similarities with presentation virtualization, VDI solutions are also a remote display protocol that hosts centrally-managed virtual machines (VMs) that client PCs are connected to on a one-on-one network relationship. Also known as desktop virtualization, this method utilizes a hypervisor that is in charge of hosting a dedicated operating system VM for each client individually. Due to the fact that each client is totally separate from one another on the server, this option allows for flexibility, management and security.

Why VDI? Firstly, it saves you more money since it has smaller software licensing requirements and it also reduces the need for staff to manage and troubleshoot problems. It also allows for secure mobile access to applications by enabling hardware-based GPU sharing through a secure connection from any device as well as better desktop security thanks to customizable permissions and settings. Lastly, it allows for easier maintenance – after logging off at the end of the day the desktop can be reset wiping clean any downloaded software customizations.

Application virtualization is capable of allowing applications to run in environments that are foreign to the them, for example Wine allows some Microsoft Windows apps to run on Linux. By establishing a common software baseline across multiple computers within an organization, application virtualization also reduces system integration and administration costs. Finally, it enables simplified operating system migrations, whereby applications can be transferred to removable media or between computers without having to install them: effectively becoming portable software.

Not only has virtualization revolutionized the world of IT and computing, but it also has the potential to do the same for your business. Give us a call and find out which option is best for you and your unique business requirements.