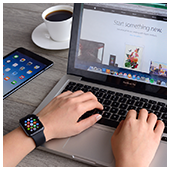 The iPad was originally created for individual consumers even though it was later adopted as a viable productivity tool. After several functionality and style changes, Apple has finally released an iPad that could rival the PC: the iPad Pro. The latest update in Apple’s lineup of tablet computers is a vast departure from previous iPad devices, and with the recently announced changes in the upcoming iOS 11, the company looks poised to shift its focus from individual to enterprise users.

From mobile to desktop

Apple’s iOS platform was originally designed for mobile devices, but the company is making its mobile operating system more desktop-friendly. In the upcoming iOS 11, users can expect a user interface (UI) that’s very similar to a Mac desktop UI with substantial capabilities like multi-tasking, which will allow users to view programs in a split/slide view.

The Files app for iOS will be particularly useful for businesses that use various cloud storage platforms such as Box, Dropbox, Google Drive, and OneDrive. With this handy new app in iOS 11, all files can be accessed, downloaded, and shared within one single platform using your iPad. This app will be very similar to the Finder folder in Mac.

Aside from the multi-tasking capability and the Files app, the new enterprise user-friendly OS will provide users with Drag and Drop capability — previously unavailable to iPad. Instead of having all apps displayed on the screen, users can now enjoy a docking system that Mac users will find familiar. Existing Apple enterprise users will find the new iOS more in-tune with their needs, as switching from one device to another will be more seamless.

What businesses can expect

Whether Apple’s major redesign will be enough to convince non-iOS device users to switch is yet to be determined. It’s also uncertain whether more enterprise tools can be expected from later versions. What’s certain is that Apple has introduced enhancements to the iPad Pro that are significant enough to make it a formidable choice as a standalone enterprise computer.

Many businesses already use an iPad in the workplace, and with these enhancements, integration of mobile and desktop functionality will be more seamless across all Apple devices. This may also prove to be a significant shift for the iPad from being a secondary computing device that displays content to being a primary computer that’s used for creating content.

Apple has always been focused on individual preferences rather than an entire market segment. But with the iOS 11, it is enterprise users who have the most to look forward to. If you need intelligent recommendations on device and usability features on both mobile and desktop devices, call us today.