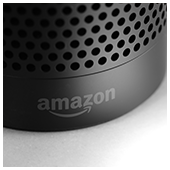 Amazon is setting its sights on the VoIP market again and will use its Alexa technology to launch a new phone system. Based on a new patent, users of Amazon’s artificial intelligence (AI) devices might soon be able to enjoy a smart speaker and phone in one. This won’t be the eCommerce giant’s first attempt at launching a wireless phone system, but this time it seems that they’re taking the time to develop the technology. Read on to find out more.

Amazon’s 3D-enabled Fire Phone was its first attempt at launching a smartphone, but it failed to set the mobile phone market ablaze. Based on the company’s recent voice-controlled phone patent, they are developing a smarter and more practical wireless phone technology, which will be integrated into their successful smart speaker devices, Amazon Echo, Echo Dot, and Echo Show.

The system will work by linking a mobile number to the Alexa devices, which would have a mechanism for notifying the user of incoming calls, answering calls via the smart speaker itself, as well as placing calls by giving commands to Alexa. What makes the Alexa-powered devices a compelling phone system is its ability to identify users based on a voice recognition system already built into the devices.

Note, however, that the mobile carrier would still be providing the communication service, with the Alexa device serving only as a medium, which is how most VoIP communications works.

What it means for your business

Amazon’s Alexa-powered devices are attractive for their voice-control technology. Although they did not pioneer it, they integrated it with devices that allowed them to go beyond what other AI devices can do. The Echo Dot, for instance, is especially useful to those who use a variety of Internet of Things (IoT)-enabled devices, such as lights, switches, and TVs, to name just a few.

Its voice recognition capabilities are also a cut above the rest, being able to recognize voice and adopt your speech patterns the more you use it. It can also serve as an all-around assistant in a room or in any office setting, helping you check the weather, send a message, or provide calendar event updates.

As Amazon develops its voice recognition technology for its Alexa-powered phones, it can be expected that this same technology would make it a formidable home or office phone system that can easily find contacts, screen callers, or conveniently set up conference calls — all by voice command. But as of now, Amazon’s patent is in the early stages of development.

How to reduce data loss in Office 365

How to reduce data loss in Office 365