5 Android changes to look forward to 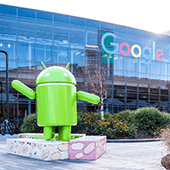 Google has recently released an early preview of Android P, the next major release after Android Oreo. While we still don’t know what sweet treat the update will be named after, software developers have already had the chance to play with some of the features. Here are five changes you can look forward to later this year.

Indoor positioning
If you’re having trouble finding your way around a huge complex like a mall or factory, Android P can help with a feature called WiFi Round-Trip-Time, which triangulates your device’s position in relation to the building’s WiFi access points. Developers can use this feature to create GPS apps that give users a full layout of the building and how to get to certain stores or areas.

Improved notifications
Android P will also be adding more ways to interact with notifications directly. For instance, instead of an alert saying “[person] has sent an attachment,” image attachments will now appear on the notification window, eliminating the need to unlock your phone and open the app to see the attachment.

You’ll also be able to make use of smart replies, a machine learning feature that scans the text of an incoming message and suggests three basic responses. So if someone asks whether you’re free to attend a meeting in the afternoon, Android will produce replies like “Yes”, “No”, or “I’ll check.”

Better security
To protect users from the onslaught of cyberattacks and data leaks, Google is fortifying Android P’s security and privacy settings.

Apps will no longer have access to your device’s sensors, cameras, and microphones when they’re not being used. This means users won’t have to worry about apps tracking and recording their conversations, facial features, and other types of personal information without their permission.

What’s more, apps will easily access Android’s fingerprint system. This will make authentication consistent across different apps so users know their fingerprints are being processed by a trusted source and not some uncertified third party.

Enhanced volume slider
The volume slider is getting some improvements, too. Other than being moved from the top of the display to the side, the volume slider will get a button that allows you to toggle between different ring settings (e.g., mute, vibrate, and ring). There’s also the “media output” setting that enables you to connect (or disconnect) Bluetooth-enabled audio devices to your phone.

Neural network processing
With this feature, machine learning processes are carried out on the device itself instead of sending it to the cloud for analysis, which means fewer privacy leaks. This also means Android P can quickly learn and adapt to the user’s behavior, allowing for a more customized user experience.

These aren’t the only set of features you can expect later this year. As it’s just an early build reserved for those subscribed to the developer preview, Google is probably going to add more functionality and design changes to Android P, so make sure to tune in to this blog to find out about future updates!